UI Vs UX in Web Development: What things you should be knowing?

Is UI and UX the same as presumed by most of them? Well, there is a difference between the two, as most of the people fail to understand.

To start off things with, UI refers to a User Interface i.e. the controls of a website or an application enabling users to use the website or app. Whereas, UX refers to the User Experience i.e. the process a user goes through when dealing with webpages or app screens.

Before we get down to actual differences, let us dive deep into understanding some more essentials related to both, as a good web development company in Faridabad would rightly point at. This would make things clearer to you so as to never confuse between two terms in the future.

Most of you think UI and UX follow the same design pattern, and hence use the terms synonymously, but that’s not really the case. UI encompasses visual controls you seeon the frontend while UX encompasses invisible structure you can’t see and present on the backend.

It is the UI is a gift wrapping then UX is inside the gift. So what you see on the outside is UI with UX is doing the actual magic on the inside and for that you need good web development services in Faridabad to do the job with finesse.

UI is more about designing stuff wherein you get to create the elements or components giving a complete visual look to a website or an app. UX is all about the development stuff wherein coding and programming required from experienced web developer to have pages or screens interconnect with each other.

On one hand, a UI designer iswell aware of aesthetic science and UI tips to have an in-depth knowledge of what users like to see and where they like to scroll or click often so as to have the real estate grasped to the fullest. While on the other hand, a UX designer is well aware of social science to comprehend the behavioural approach i.e. mindset and approach with which a user would surf about.

While we saw UI and UX having their individual identity, when it comes to hiring a web development company in Faridabad to do the job, it is expected to have both the skills go hand in hand within one partner. It makes much more sense for businesses to have the same person or entity handle the job of UI design and UX development so as to cut down on costs and time, while using same brains to instil UI body with UX soul seamlessly.

There are businesses that tend to separate the duties considering it much more viable in order to achieve perfection with two different intellectual thinking. No matter whether you have a common UI/UX designer on board or have two separate people do the job, ensure you do not get confused between the two the next time.

Hope the confusion of UI and UX is over?

Both UI and UX are like body and soul; can’t be separated or ignored. Henceforth, recruiting WordPress, Python or PHP web development services in Faridabad on board to have UI and UX be designed and developed should be a fairly wise choice to be on top of the game. 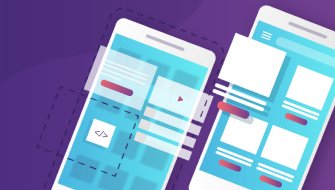